Fiskardo, Kefalonia – A visit to the Ionian isn’t complete without seeing Fiskardo

About Fiskardo, Kefalonia – Fiskardo is by far one of the most popular ports in the Ionian, for yachts, superyachts and tourists staying ashore too. This picturesque village houses beautiful Venetian architecture and is one of the few places in the area that remained largely standing following the major 1953 earthquake. Despite being busy, Fiskardo is worth visiting for a night – it is naturally stunning and the vibe is lively. 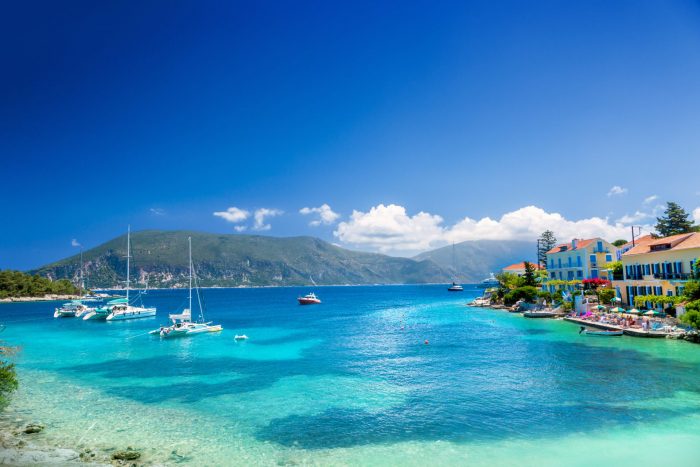 How to moor – Quay space is limited so consider longlining outside.

Be aware of the ferry and tripped boats coming in and out. They will certainly not slow down for a yacht midway through mooring up so remain vigilant.

When to go – Fiscardo is safe and comfortable in W & NW winds. Easterly winds blow directly in – fine if you are stern to on the east quay (stern into the wind) but no good elsewhere.

When to avoid – With winds from the South, the swell can pick up big so avoid this harbour. It’s also exposed to the East so avoid when easterly winds are forecast.

Restaurants – High quality restaurants line Fiskardo’s harbour front. Elli’s is one to note, as is Apagio’s – both offering Greek cuisine but with an elegant modern twist. For something really different, The Lord Falcon in the bougainvillea-lined backstreets is an exceptional Thai restaurant (yes you read that right). Fiskardo gets non-yachting tourism too so best to book a table for dinner wherever you decide to dine so you don’t miss out.

Somewhere to swim? Make your own private swimming area by longlining just outside the harbour. Otherwise there is a beach towards the ferry dock, and another one to the south past the archaeological site. Or swim off the rocks by the lighthouse (see below..).

Anything else to do? It’s definitely worth following the signs to the old Venetian Lighthouse. You will have seen it on the headland as you entered the bay. It’s a beautiful swimming spot and a nice wander through the trees. If you are into diving then contact Fiskardo Divers who run a dive boat from the harbour. There are numerous wrecks close by and some interesting caves too. Dive training is also possible for those without qualifications. 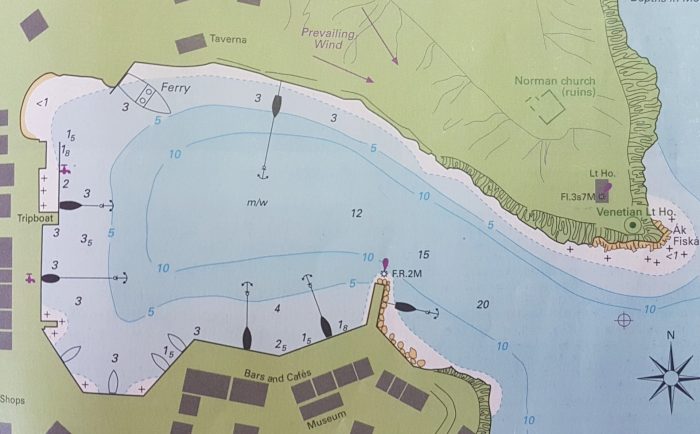 Other destinations to read about: